Preview v34 is out

Preview v34 is out


After 18 months of development we are proud to announce you that
Red Devils and Desert Rats Update is now available!

This is our biggest update yet both in term of content (two maps, seven vehicles, 14 weapons,
45 infantry gears) and gameplay features that will bring a new dimension in ArmA 3 WW2 simulation.

This update is the result of a extremely devoted team effort with the selfless involvment
of my fellow team members - it would not have been possible without you:
kju, Kerc, swurvin, iron_excelsior, Diabolical, GSTAVO, Jaki, LAxemann, Jeg0r, bax, DontShootMe,
InstantMuffin, Bricks, Stardust, Lawz, sokolonko!

I would also like to thank you - our fans - for your continous support and enthusiasm!

In 1941 the Libyan port city of Tobruk became besieged by Axis forces under command
of the Desert fox - German Generalleutnant Erwin Rommel.
Australian, Indian, British, Czechoslovakian and Polish troops defended Tobruk for 241 days.
The siege was lifted as a result of the Allied operation Crusader; serious losses and poor
supplies forced Rommel to retreat. Despite countless efforts of the Allied army, Tobruk
was recaptured by the Axis forces on 21 June 1942.

The defenders of the city became known as - The Rats of Tobruk.


In 1942 an Egyptian town of El Alamein became a place of fierce battles between
Desert Rats - British Imperial and Commonwealth forces and
Panzerarmee Afrika - Italian troops and German expeditionary force.

El Alamein was a minor railway station located on an open, desert terrain, however
well prepared fortifications and minefields helped Allies to repel the enemy attacks
and stop them from capturing Egypt and Suez canal.

Explore staging area of an unnamed British Division. Visit each exhibition area
and experience British forces by land, air and sea. All clear!

Players can attach a bayonet to the muzzle attachment slot of their weapon. Similarly,
some weapons have bayonets integrated and do not require an additional muzzle attachment.
After switching fire-mode, the player can use it to stab enemy within melee range.

Currently the AI are unable to attack with bayonets.

Damage is based on the physical bayonet itself - so aim with the bayonet! (not your crosshair) 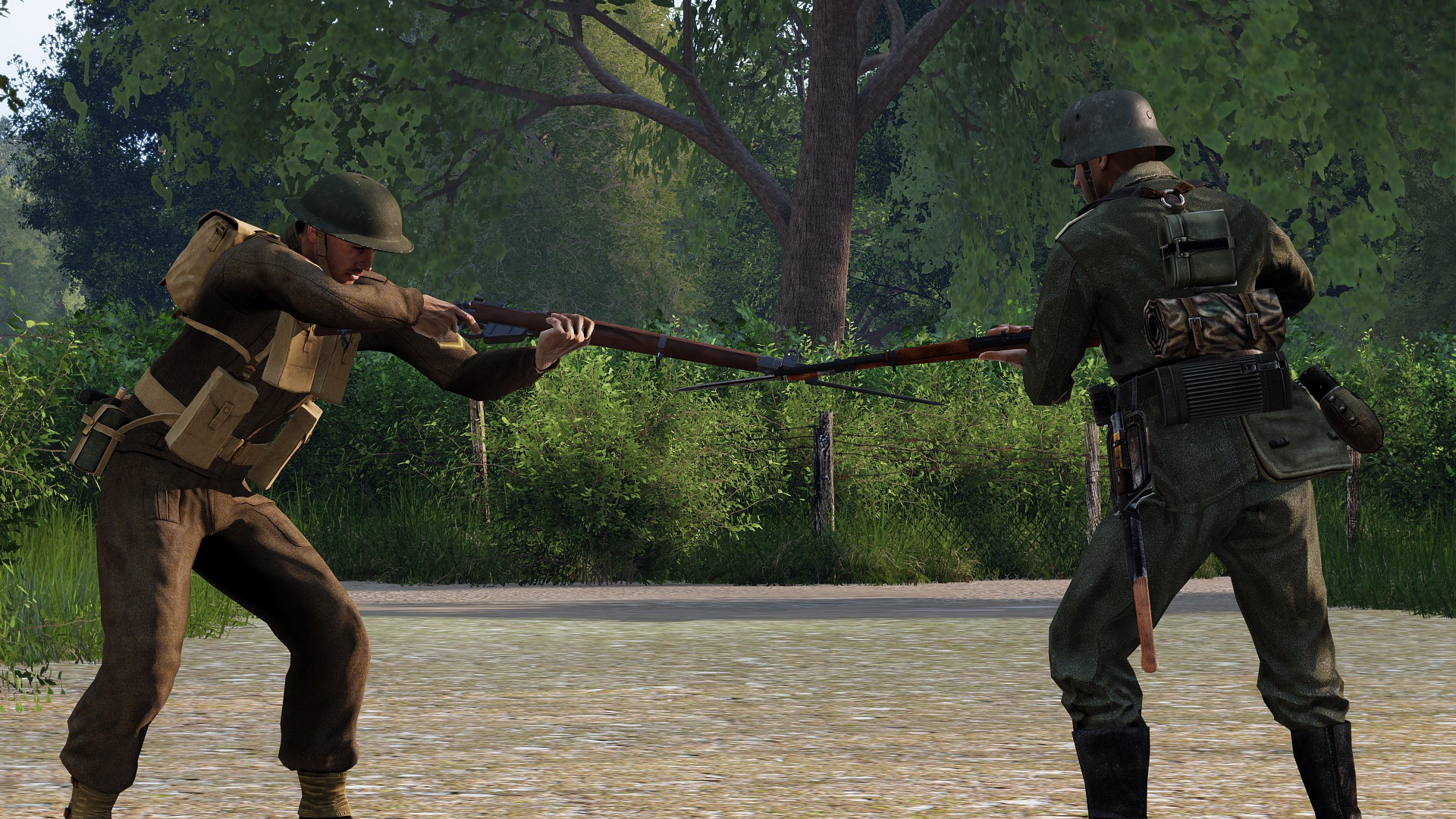 Applicable for:
See the ingame field manual for more details. 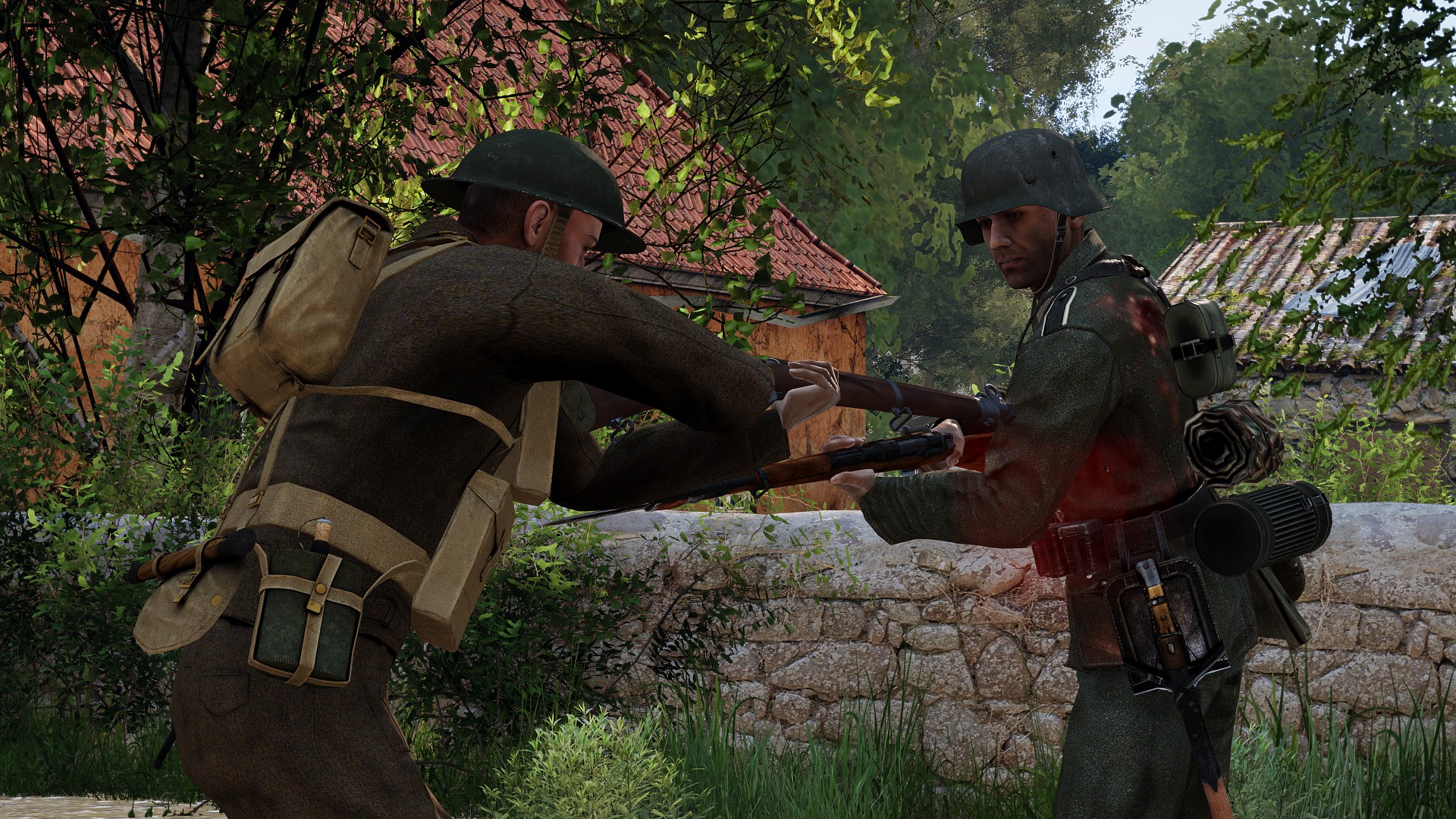 Players can attach a rifle grenade launcher to the muzzle attachment slot of their weapon.

After switching fire-mode, the player can load a rifle grenade onto/into the launcher
and fire it, much further than can be thrown. Switching away from the rifle grenade
fire-mode with a grenade loaded will automatically unload the grenade.

The AI is able to use rifle grenades like any other weapon but have no means of "fitting"
the attachment and must use the pre equipped weapon variants. 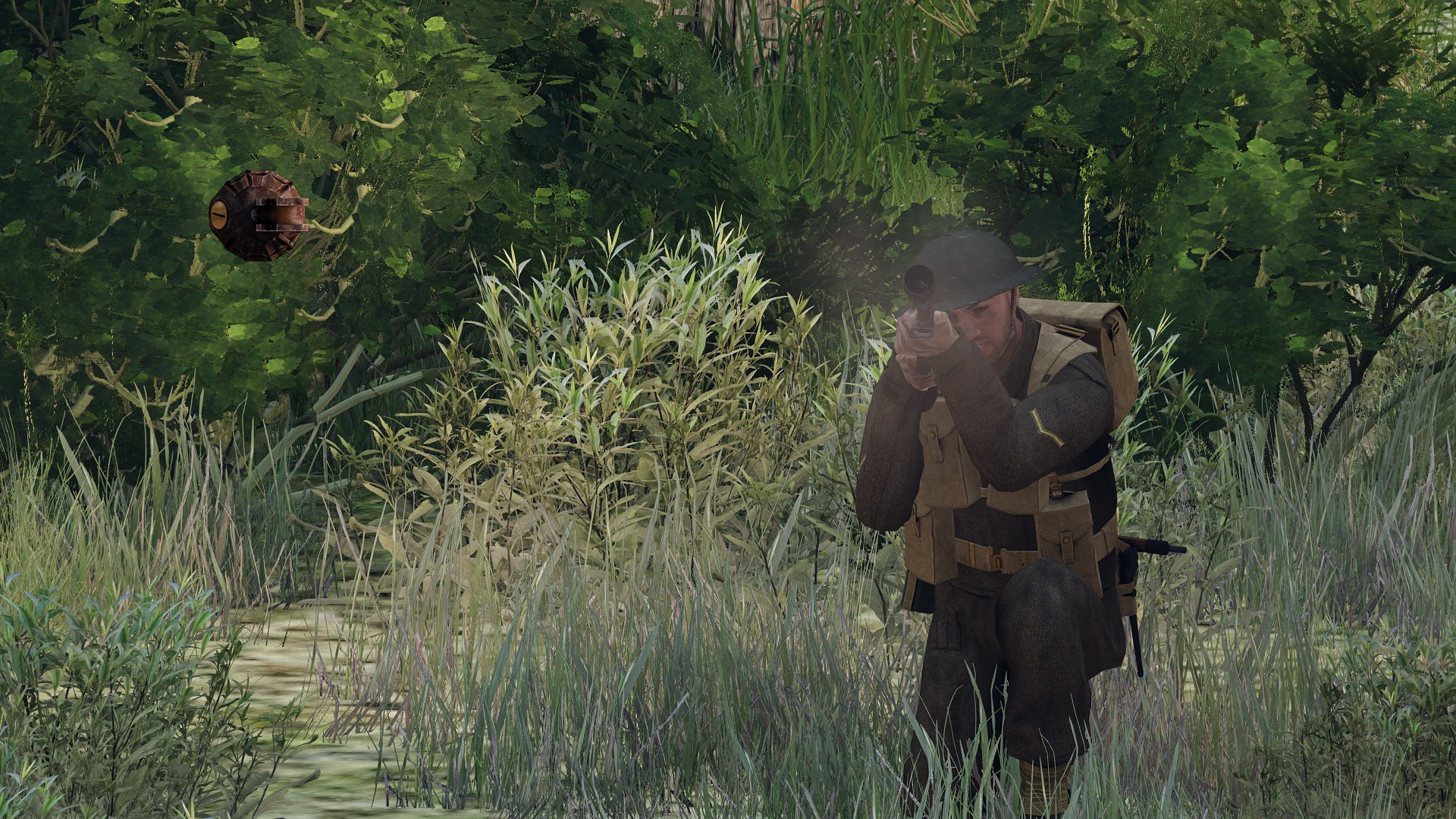 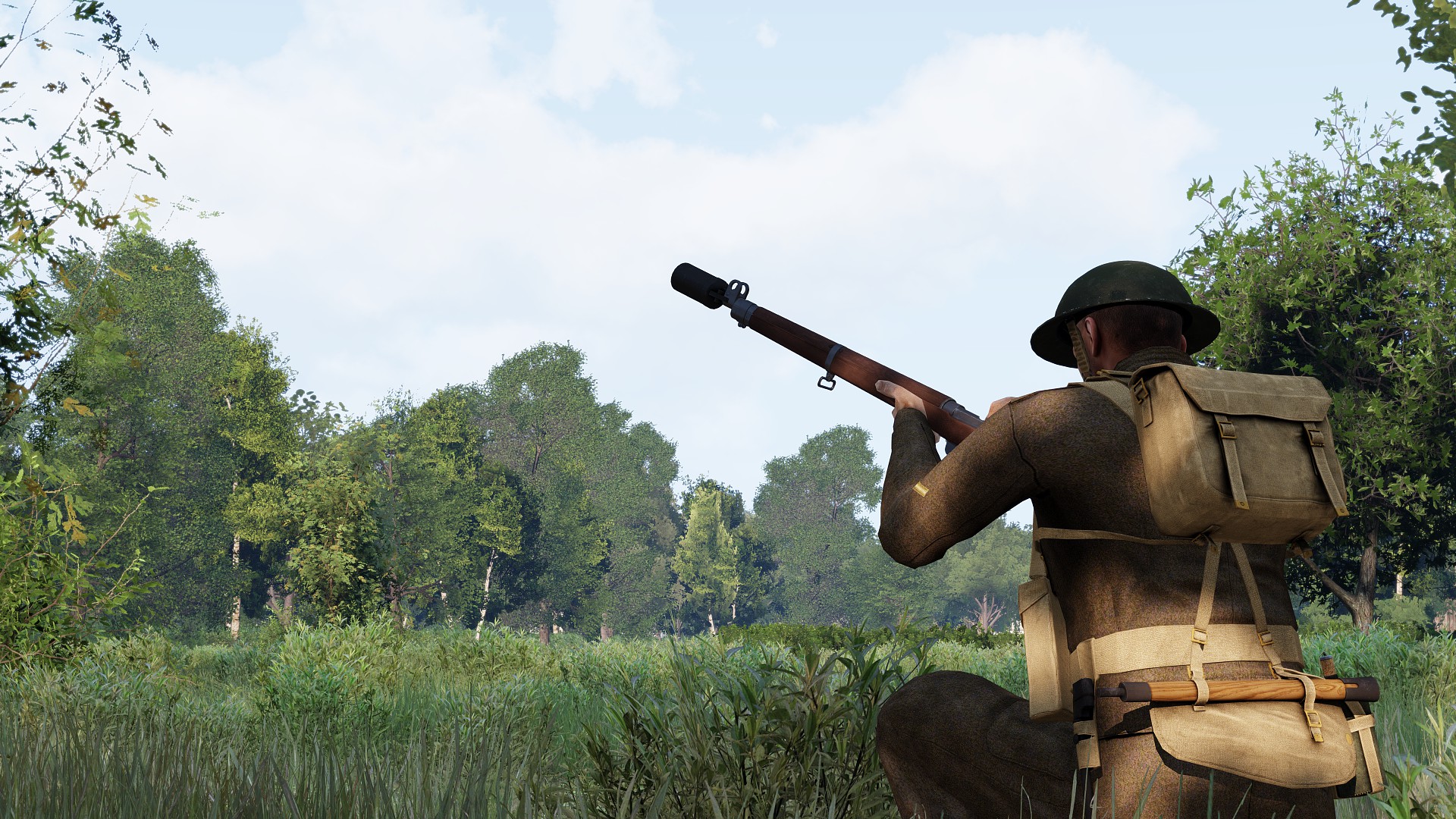 The anti tank grenade launcher is mainly to be used again lightly armored cars but
is also a threat to tanks. The explosive round can also be used against infantry.

It is available in both rifle and launcher version for maximum flexibility.
The magazines are compatible to each others. 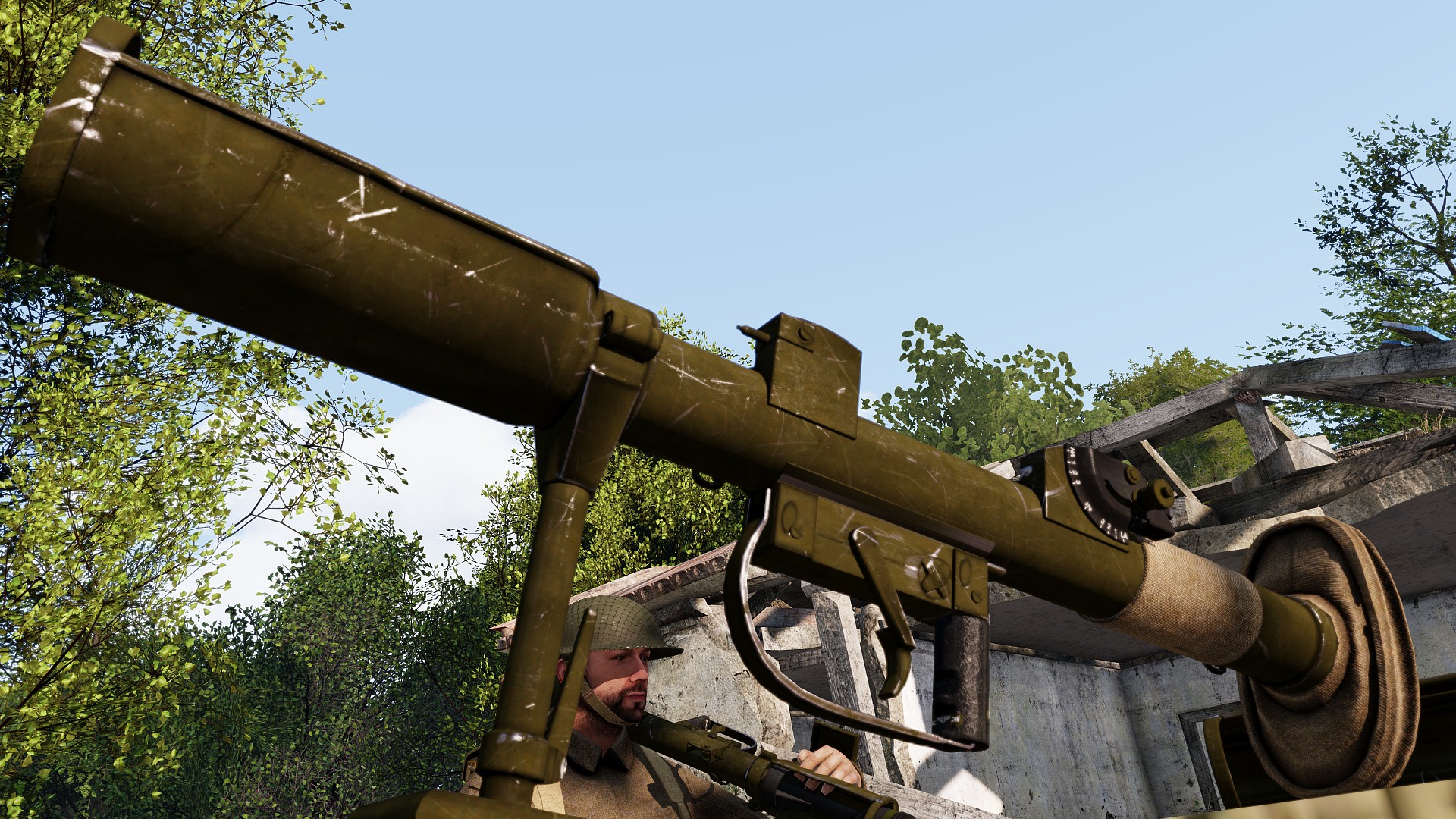 A special type of smoke grenade - while it’s main use is to provide smoke-cover.
The initial explosion may kill or injure nearby infantry in a fairly big radius.
In addition, the lingering smoke is hazardous. It leads to non well-being and may
even cause serious injury if exposed for too long. It’s even dangerous to crew
when the vehicle is open or the crew is turned out. Stay inside!

Currently only available to No.77 Grenade. It will be extended to mortar, artillery
and bombs soon. 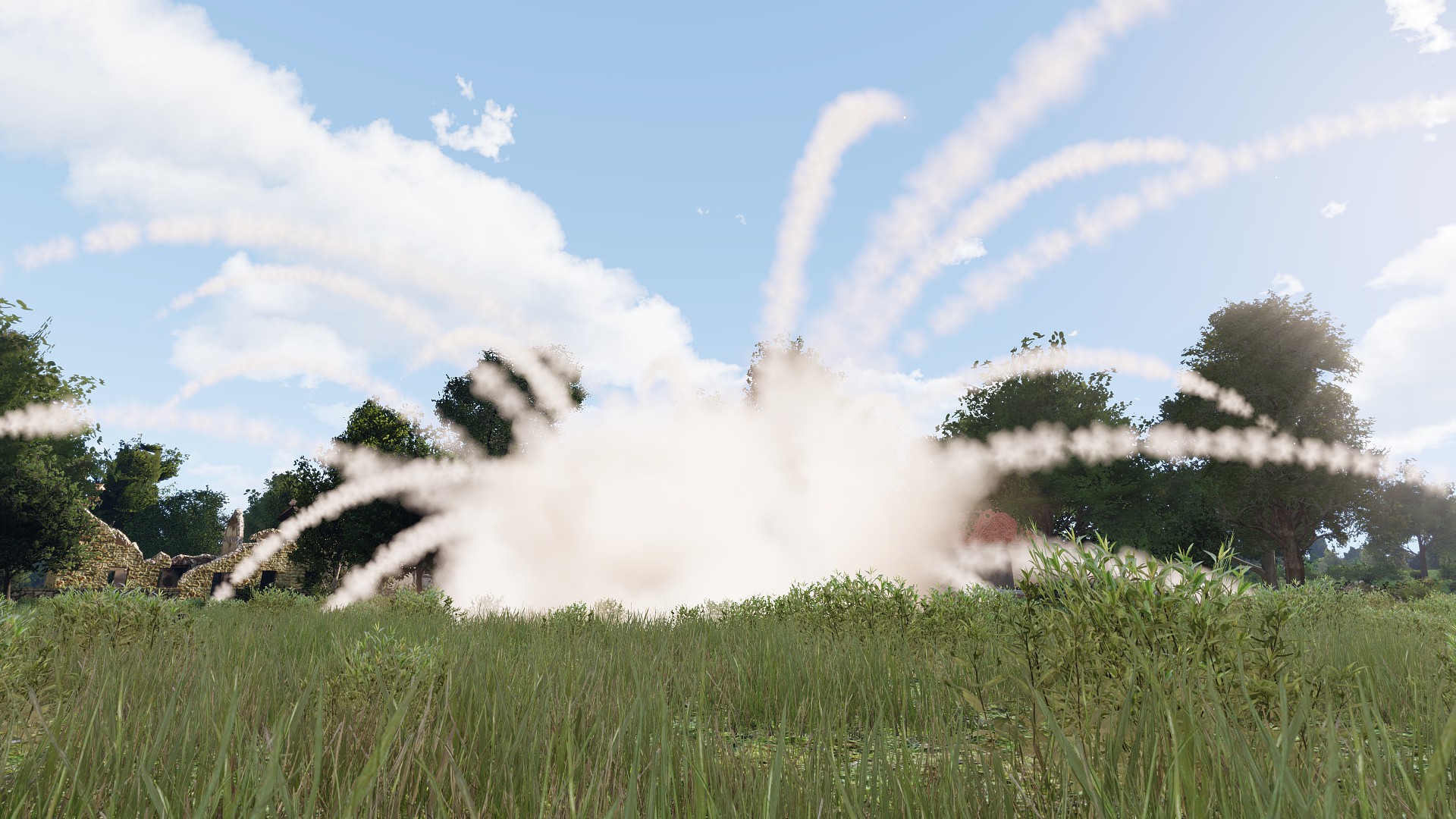 Degtyaryov anti-tank rifle has not proven itself to be accurate or effective against
tanks, however it's 14.5mm round was devastating against cars or lightly armored vehicles.
Yet, with a bit of luck, it could detrack a tank or even shoot down a plane!

Due to its weight it can only be used prone or when the weapon gets rested on some support.

Note: AI are not affected by the limitation. 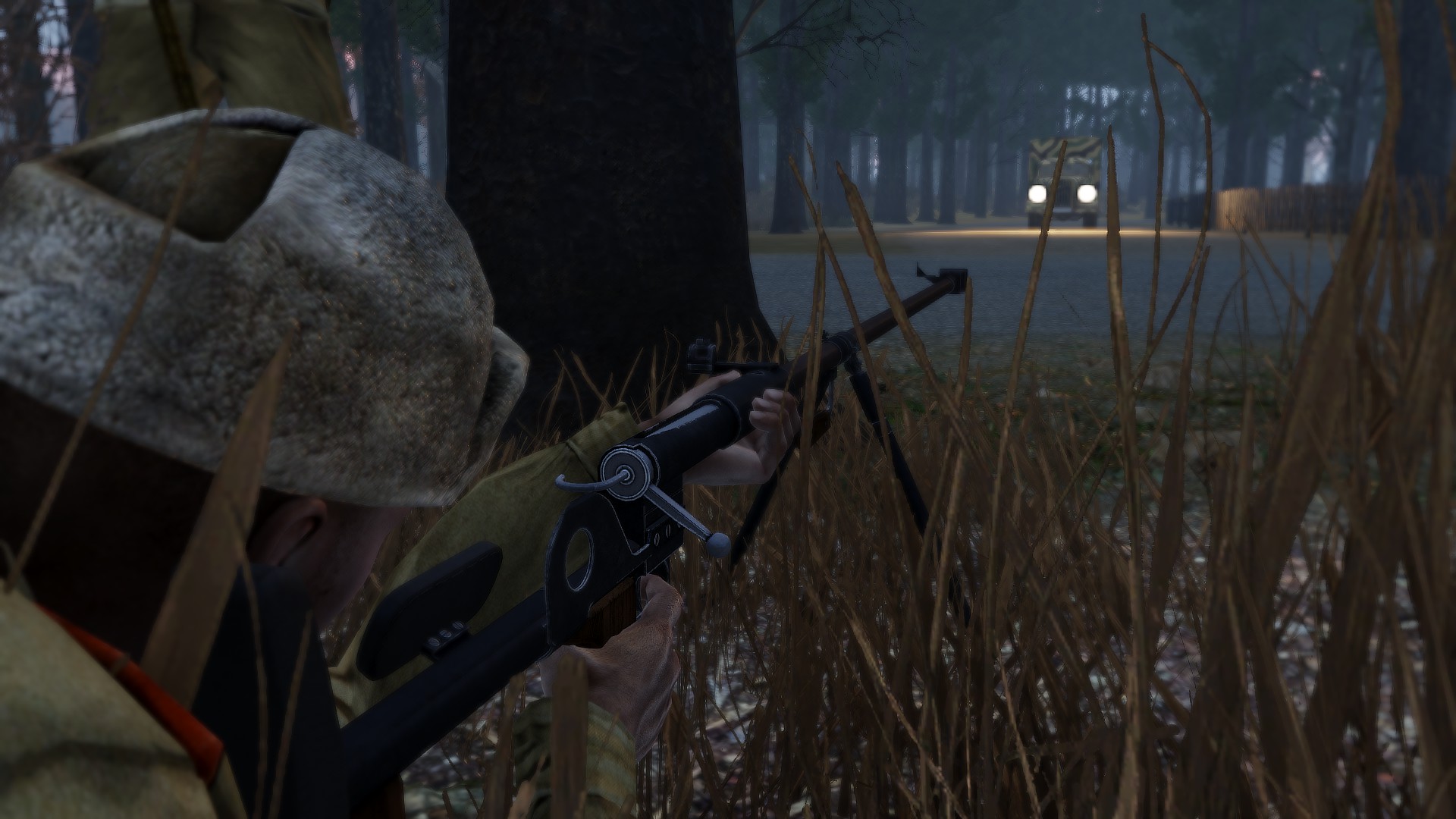 The Scottish regiments are known to impress their opponents playing the iconic bagpipes
while going into battle. 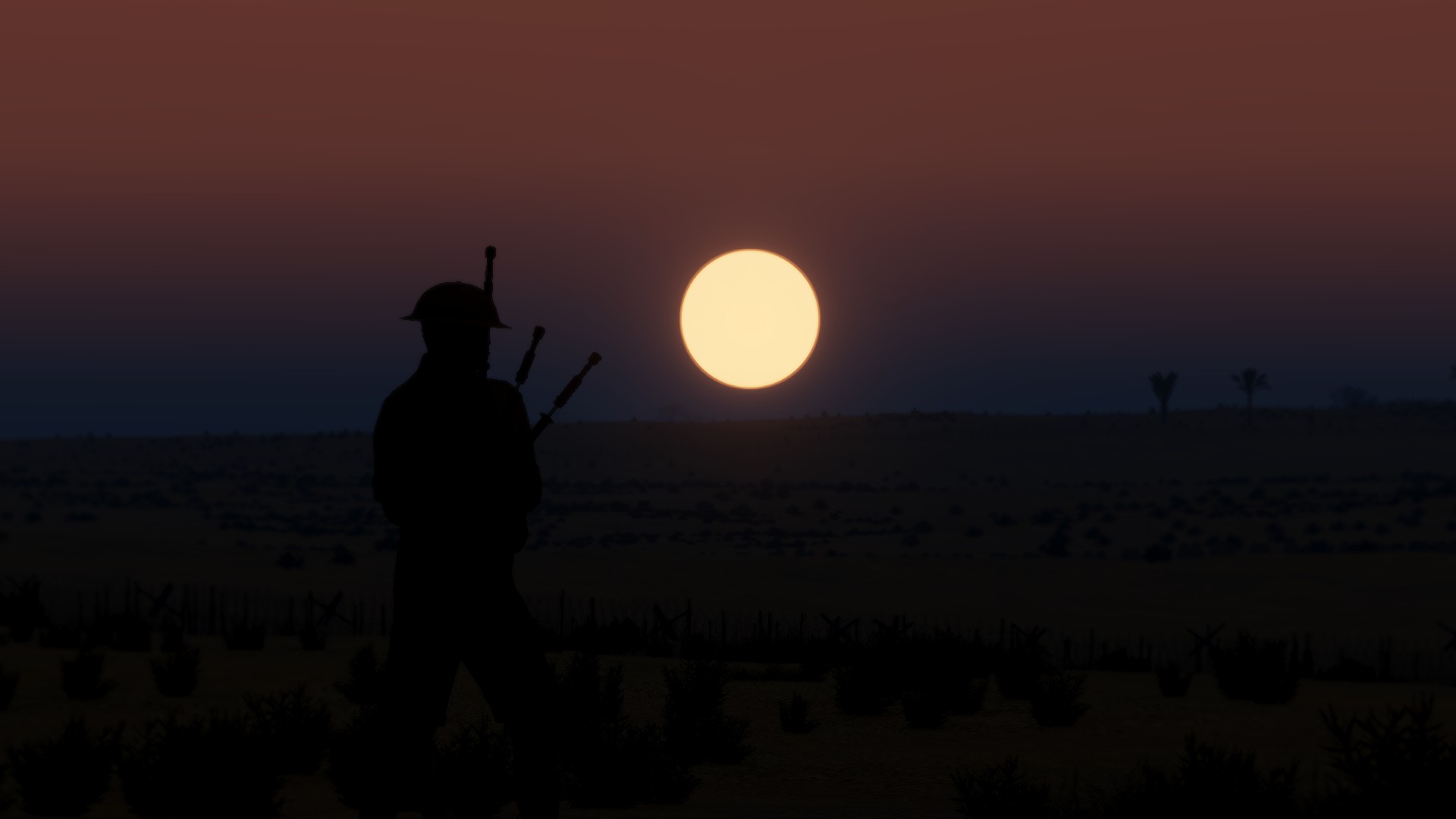 There is a manual mode to play the coords yourself, or select from a list of availables
tunes/tracks. Use the reload action to select, and the fire action to play.

The custom HUD display several vital information:
This update made it available to all remaining vehicles, displays now also the hull
damage, shows the damage state and fixed faulty configuration of a few vehicles.

Cars and trucks now get slowed down when moving in the landscape outside roads or
dirt tracks. The reduction can be up to 40% in mud or sand surfaces.

So to use a road or not is now a tactical choice. 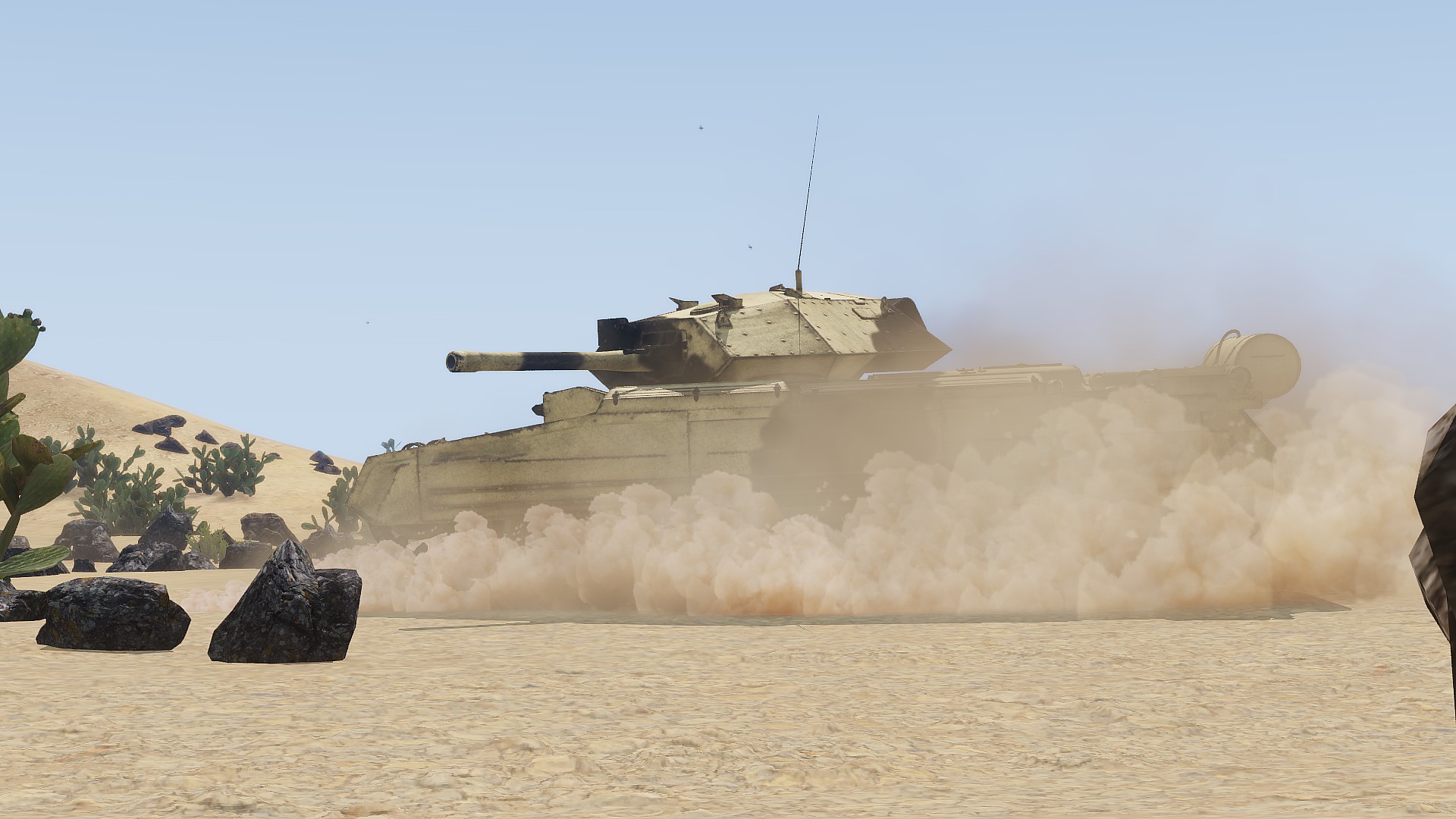 With the dynamic loadout system you can now customize your plane's loadout via
scripting and/or in the ED3N editor before the mission start.
In the editor simply double click on the plane you wish to customize (or right click>>Attributes) and select:

You will see a top down view diagram of the plane and the available bomb pylons:

Now you can customize the payload for each of the pylons individually, or select
one of the existing preset loadouts from the upper left drop down list. You can
also check the Mirror box in the right upper corner for a symmetrical loadout
should you desire one.
When you are happy with your selection just click OK and see the new payload
on the plane in the editor. 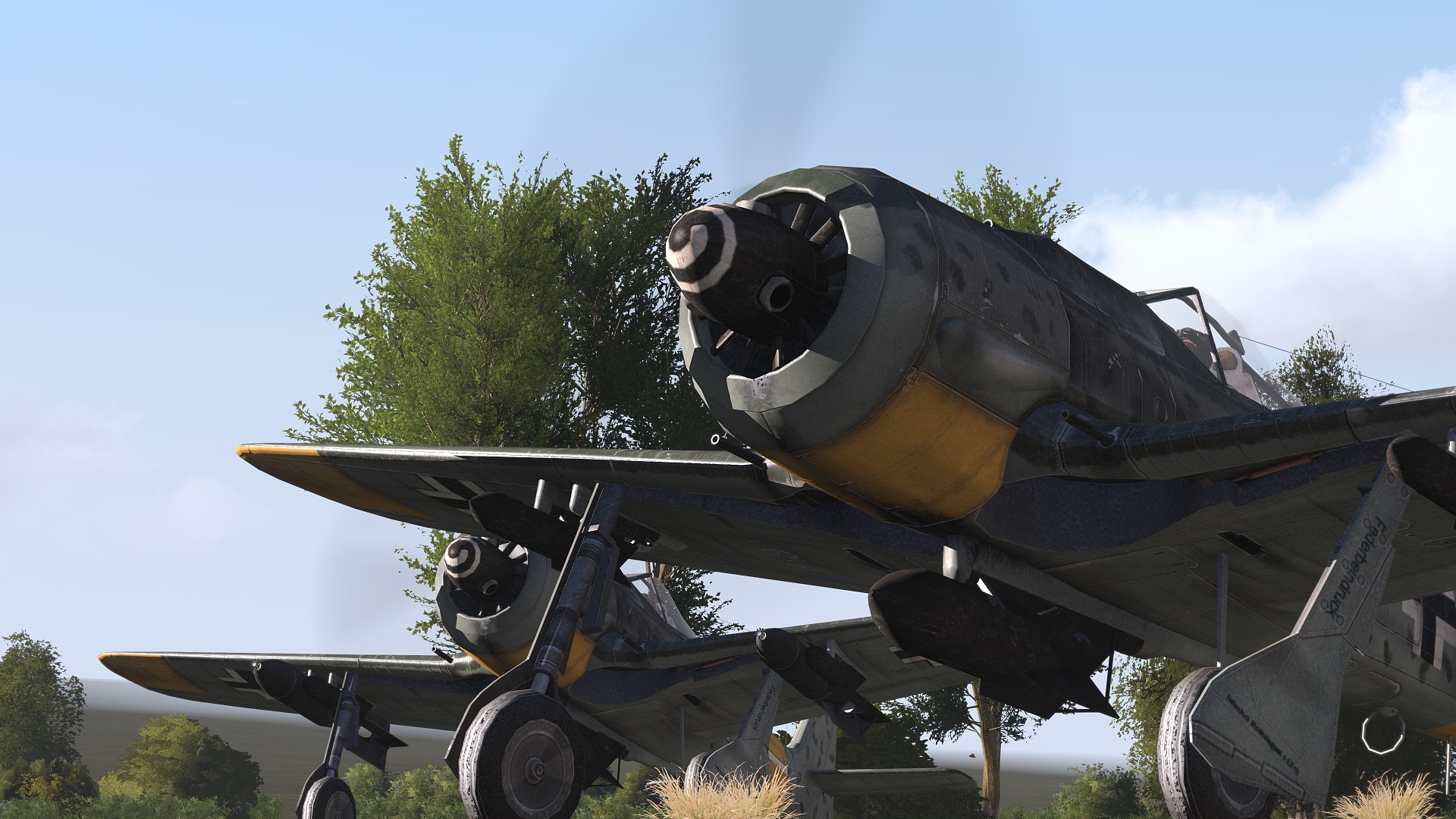 As human tank commander with AI gunner this update brings some useful additions to
further improve the experience. Important to note, a previous update already allowed
the AI gunner to engage with the main gun on his own, like he already does with MG weapons.

Please send us further suggestions you see making it even better!

There is now an additional cursor for the command, with an AI gunner present, to help
you target hostiles or positions more effectively. It will also remain active when you
turn out. When you are in optics view, or have a weapon in hand, the cursor gets hidden.

Note: It is only visible in cadett difficult and with weapon cursor activated in difficulty options.

Next to the usual "target" key action on vehicles or infantry, you can now also order
an AI gunner to target ground or any position/object/wall, if you hold ALT at the same time.
This also allows you to target a vehicle more precisely to try to hit specific components.
To cancel just target a vehicle/infantry, or use the "target" key action with nothing behind the cursor.

Note: In cadett difficult and with weapon cursor activated in difficulty options it will show an arrow at the target location.

When you have assigned an AI gunner a target, you can use the "fire" or "command fire"
action to give him the order to unleash the main gun (when ready). When MG is selected,
the AI gunner will fire a suppressive fire burst lasting a couple of seconds instead.

You can read up about custom gameplay features in the field manual now.

Note: This is still work in progress and more to come with future updates. 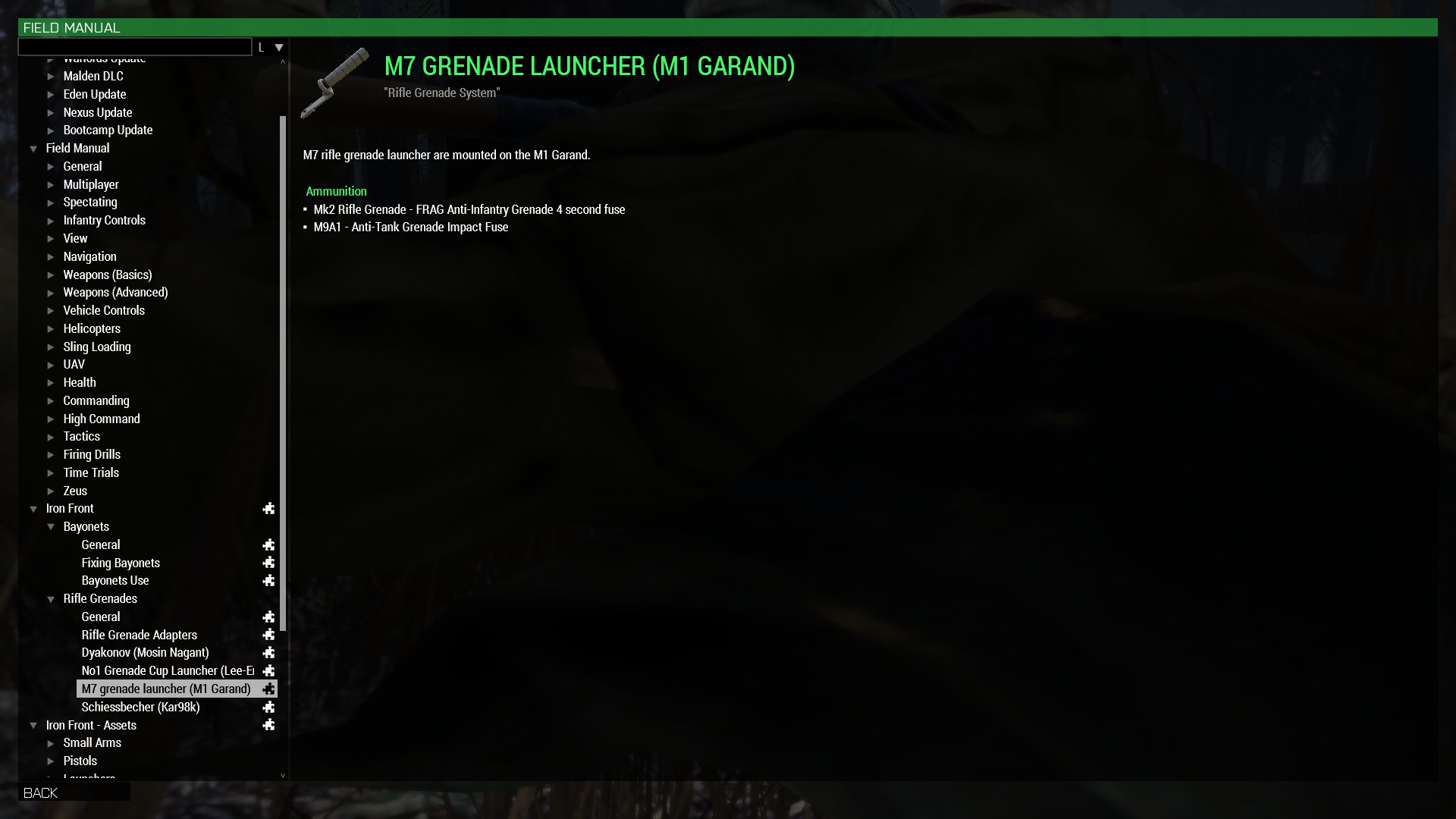 All the new weapons come with custom weapon holding and reload animations (only webley pistol comes later).
In addition, a whole new tailored animation system for rifles using stripper clips,
and the loading of rifle grenades are featured in this update. 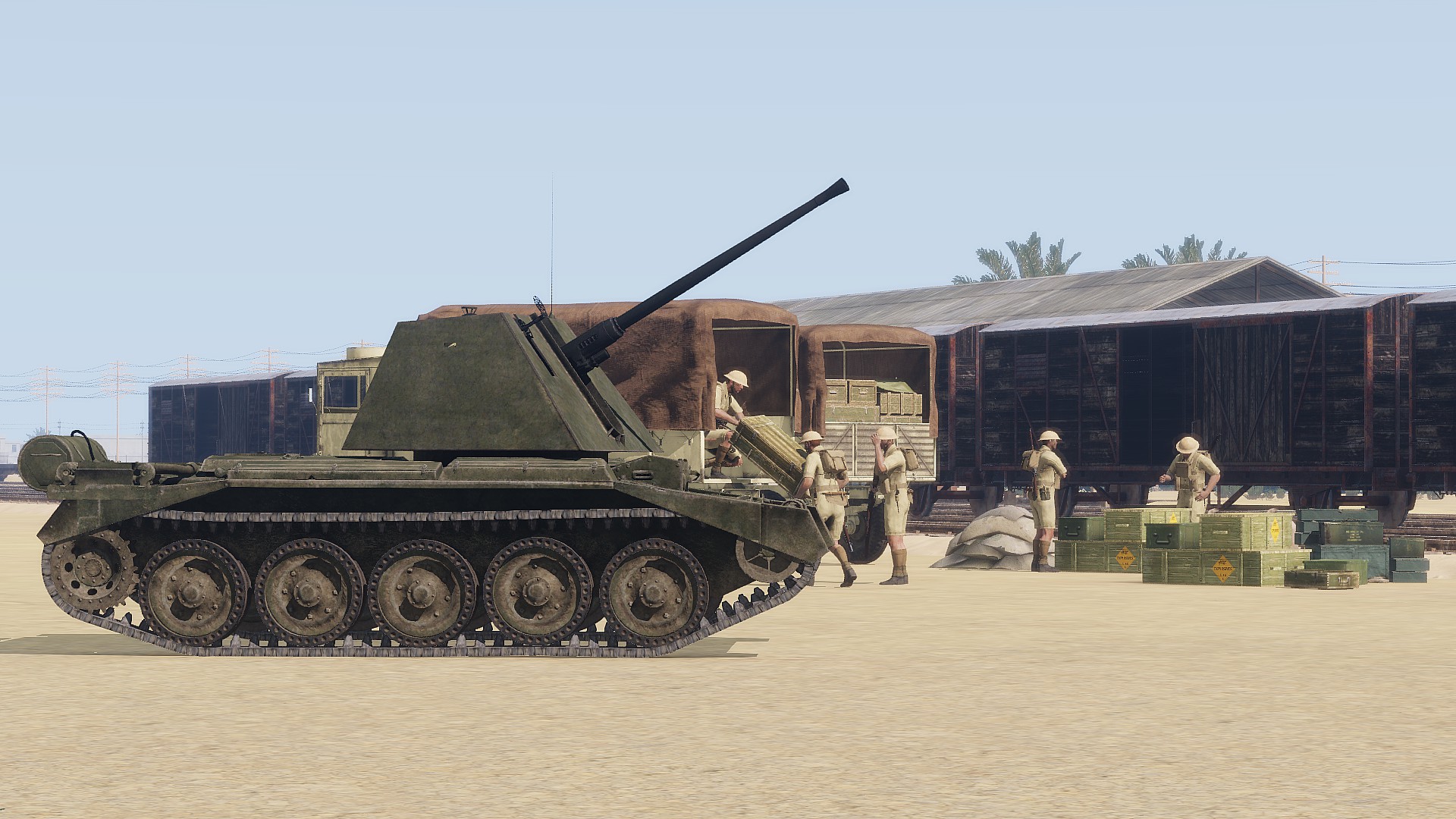 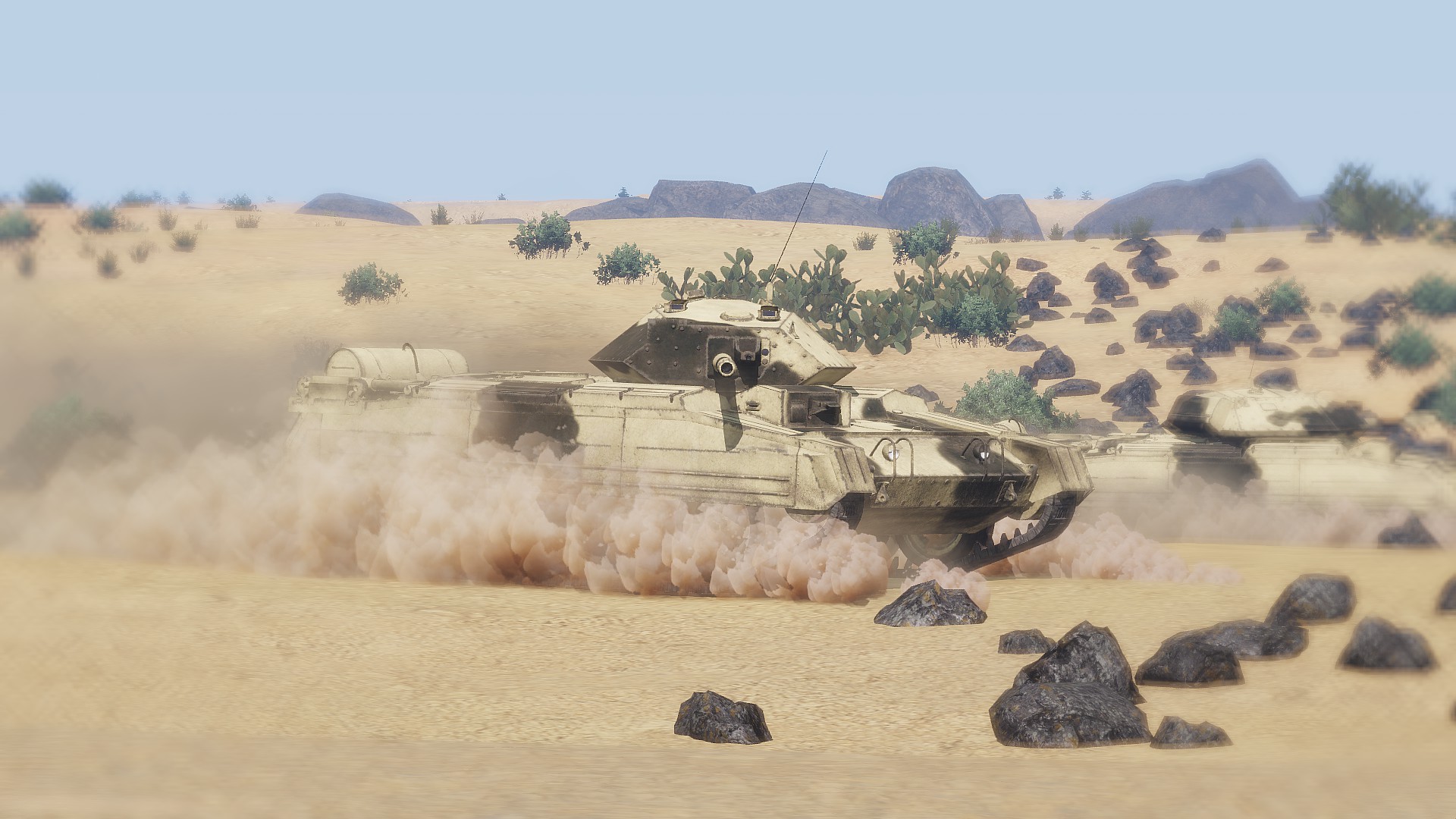 Make sure to delete all bikey and bisign from IFA3 first (use agent ransack tool)!
Top
Post Reply
6 posts • Page 1 of 1

Users browsing this forum: No registered users and 6 guests